Posted on September 11, 2013 by Lorraine Matthews-Antosiewicz 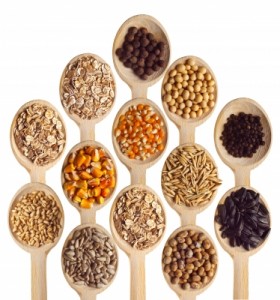 Remember Chia Pets? For those of you who are unfamiliar, these small clay sprouting figurines were a popular gift items back in the 80’s. Add water and within a few weeks your chia pet would produce green sprouts resembling an animal’s fur or hair. My favorite was Chia Mr. T.

These days, chia has become popular for another reason – as a nutritious food source. Chia seeds are an unprocessed, whole-grain food that can be absorbed by the body (unlike flaxseeds). One ounce (about 2 tablespoons) contains approximately 140 calories, 12 grams carbohydrates, 4 grams of protein, 9 grams fat and 11 grams of fiber; plus vitamins, minerals, and antioxidants. They are an excellent source of omega-3 fatty acids, low in saturated fat and cholesterol-free. No doubt, chia seeds are nutritious and can be a healthy addition to most diets.

One health claim, however, has gone a bit too far. Some sources are promoting chia seeds as being beneficial for weight loss by causing the belly to expand giving a sense of fullness resulting in eating less. Unfortunately, there is little evidence to support this claim.

Powerful Weight Loss Tip: be on the look-out for false diet and weight loss claims

In one study done in 2009, a team of researchers randomly split 76 overweight and obese men and women into two groups. One group was given 25 grams of chia seeds twice a day, and the other was given a placebo. After 12 weeks, the scientists found no significant difference between the groups in appetite or weight loss.

Another team of researchers reviewed the scientific evidence on chia and came to a similar conclusion. They noted that while chia is generally safe for consumption, more rigorous examination of its effects as a supplement is needed.

Also important to bear in mind, chia seeds are calorie dense – about 140 calories per ounce as mentioned previously. So, if you are watching your weight, eat them in moderation. That being said, there’s no need to shy away from these nutritious seeds. Their mild, nutty flavor makes a nice addition to foods. They can be sprinkled on or mixed in cereal, sauces, vegetables, rice dishes and yogurt or added to baked goods.

One of my favorite ways to use chia is in this strawberry chia jam; it’s so easy to make and yummy. I like to mix it into plain yogurt and spread it on toast, waffles, and pancakes.

Now, I’d love to hear from you.

Have you ever been tempted by a false diet or weight loss claim?

Meanwhile, if you want to lose weight, improve your energy and feel better, I can help you get started. Take my free Self-Assessment at https://njnutritionist.com/freeassessment

One Response to Chia Seeds: Magic Bullet or False Claim?